Blast Off Weekend: Burbank and the Endless Comic Shops 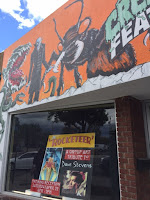 Saturday was Free Comic Book Day where stores purchase specially solicited issues to help bring in new readers and give them out for free. It gets people in the door and makes decades of comic book lore a non-issue for new readers. Nearby store The Comic Bug did two big events on Saturday and Sunday with dozens of guests, food trucks and signings. Pulp Fiction had special guests and if you donated to the Los Angeles Food Bank, you got more free issues. We weren't really interested in any free comics and perused the shelves for good reading in general. The lady picked up a short stack of graphic novels and got me The Infinity Aftermath following the events of The Infinity Gauntlet where Adam Warlock and several others now hold the powerful gems. 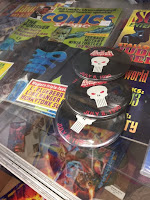 On Sunday it was off to a G.I. Joe and estate sale before we randomly visited FOUR additional comic book/geek themed establishments in the area. I'm not sure why Burbank is the place for all things creative arts but hey, it was fun to see the different set ups and offerings at each. Emerald Knights has a pretty industrial facade with no windows and I wasn't quite sure they were open until I pushed the door in. The staff was nice and chatty while the space is equal parts comics and gaming with tables upstairs for tournament and group play. I grabbed an awesomely random lead figure of Wildcats gunman Grifter for the shelf. Down the street was Geeky Teas, a board game cafe that had space for events along with swag for fandoms like Doctor Who and Back to the Future. Further along still is Creature Features which is a movie lovers paradise with oh so much memorabilia like magazines, soundtracks, promotional items and more. CF hosts art galleries and special guests, today it was a tribute to Dave Stevens' THE ROCKETEER as well as a signing with composer Charles Fox. There was an abundance of Hard Target and Batman Returns buttons as well as a couple Demolition Man, San Angeles Police Department pins! Our final Burbank comic stop was The Perky Nerd, a super clean comic and games shop with a small event space and cold brew coffee. 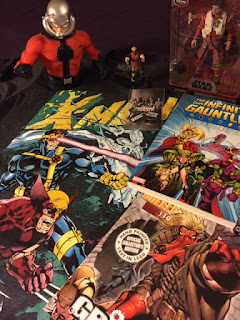 Posted by viendammage at 9:01 PM