Back in the 90's I'm sitting at a friends house watching The Sixth Sense, 40 minutes in I tell them I know what the twist is and they say, "oh you don't need to watch the rest then!" and we promptly went and did something else. I'm sure I've watched the film since then but it's definitely the least viewed M. Night Shyamalan flick that I own. With all the talk of a Split sequel happening in the same universe as Unbreakable and a sequel merging the two films, we randomly started revisiting M. Night's work on DVD and HBO NOW:

The Happening: Mark Wahlberg being super sincere in a film about plants killing humans because they f*cked up the planet? And made people super violent or killed themselves. I dunno I wasn't really paying attention.

Unbreakable: I saw this in theaters upon release and was puzzled and slightly miffed at it's comic book movie but not being a comic book movie motif. All these years later it's still a somber affair but an effective origin story that I'm excited to see a sequel to. Bruce Willis does excellent work as invulnerable David Dunn, a simple guy who comes to realize he has extraordinary gifts. The film performed well but wasn't a blockbuster yet has experienced a recent resurgence in part to Quentin Tarantino being a fan.

The Visit: After big budget, non-personal projects The Last Airbender and After Earth met with mixed critical and commercial reception, M. Night made the $5 million flick for Blumhouse and we stayed up late watching the creepy flick about estranged grandchildren who visit grammy and pop pop. At first I thought the older folks would turn out to be cannibals but I was wrong. Excellent rebound flick for the Night.

Lady in the Water: I had never seen this film and half watching it on HBO and boy was it not very compelling. Something about a mermaid and another universe? Basically, Stranger Things owes this film a creative debt, methinks.

The Village: Saw this flick in theaters as well and enjoyed it. The twist might have turned some people off but it kept me guessing throughout. Were they time travelers? Looking back today at such a stacked cast, I totally forgot Adrian Brody played the lovelorn handicapped guy and that Joaquin Phoenix was even in it.

Split: We missed this in theaters but thought the trailers looked great. Amazon Video has it for a $6 bucks and the tale of three abducted teens by a maintenance man with 24 personalities is pretty effective. James McAvoy is solid as each manifested personality whether it be a child, woman or angry dude. Will be cool to see how Unbreakable's David Dunn faces off with the off kilter baddie working with or against Samuel L. Jackson's Mr. Glass. 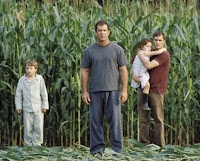 Signs: Loved this flick in 2002 and is hands down the M. Night movie I rewatch the most. It's weird to think how young Mel Gibson looks in the film from 15 years ago let alone something like Lethal Weapon or Mad Max from the 80's, he's just been kicking ass that long. The family dynamic and farm/faith life against a potential alien invasion is a terrific and satisfying slow burner. Anybody who doesn't like the water twist should go try and drink out of the oceans taking up 75% of our planet and shut up.

Looking back I feel like M. Night is the semi-precursor to Denis Villevneuve, a guy who makes classy flicks out of simple stories a la Sicario, Prisoners and Arrival. M. Night backed himself into a bit of a corner as the "twist" guy but all of his films are well made, look great, usually have solid casts and deliver in the end. Glad to see him coming back.
Posted by viendammage at 8:08 PM