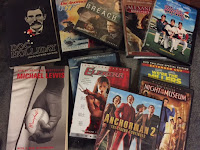 On Saturday we trekked up the 405 to quaint yet happening Sherman Oaks. We hit up a surprisingly dense library sale with books, CD's and DVD's up for grabs for rock bottom prices. Hardback tomes and paperback novels were aplenty and only set you back a buck or less. The lady found a copy of Moneyball by Michael Lewis for me and I grabbed multiple flicks on DVD, some that weren't even opened! After that it was off to the mall for a little walking around and checking out what Spring/Summer fashion entailed. Newsflash, it's about the same as every year but with more bright pastels... 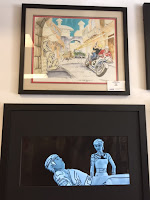 Then it was on to Ventura Boulevard for old standby The One-Up for brunch (chicken and waffles seemed like a good idea but were WAY too sweet), some cocktails and arcade madness. Newly added Time Crisis and a new two-player, stand up cabinet where we played some The Punisher side scroller. Next door is Von Eaton Animation Galleries which had some general cartoon cels up including Johnny Quest and stacks of cels from the likes of X-Men and The Little Mermaid. Then a nice used book store had an entire American West section with titles on Doc Holliday and Johnny Ringo and I grabbed the former. Looking forward to the dime store or actual story of one of the west's most intriguing characters.

Posted by viendammage at 7:36 PM