An Academy Tribute to Richard Donner 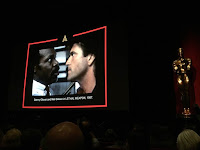 It was a go-go week with the opening of Wonder Woman, Austin for Russellmania II, back to Los Angeles for the premiere of Van Damme's Kill'em All then the next night it was off to Beverly Hills to the Academy theater on Wilshire for an amazing night, a tribute to Richard Donner! Known to his friends as Dick, Donner is one of the most influential and successful directors in history. From The Omen to Superman to Scrooged to The Goonies to Lethal Weapon, his work is filled with heart, humor and of course, terrific action! Truly unsung in the age of directors as brands or corporations unto themselves, like Steven Spielberg or Christopher Nolan, Donner worked every job in the film business before become a force in the 80's and 90's. His films set the mold and broke box office records, the former head of Warner Brothers joked that the Lethal Weapon films were huge hits but he had to give Donner a Range Rover to keep making them. 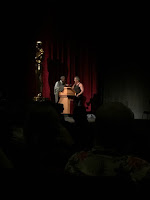 Things kicked off with two former Donner or wife Lauren Shuler employees turned DC and Marvel chiefs Geoff Johns and Kevin Fiege. The two paid tribute to the guy and gal who gave them their first unpaid then part time then full time jobs in the business and how Superman: The Movie will always be the gold standard for comic book adaptations. Film clips followed by heartfelt and hilarious anecdotes flowed through the evening as actors joked about Donner's big booming voice but even bigger heart. Chunk from The Goonies actor Jeff Cohen told of the years long tale of trying to transition out of acting and when it was time for college, asked for a letter of recommendation and instead got his tuition paid for by the generous couple. Corey Feldman was a last minute addition and shared that Dick Donner paid for his rehab and he's been sober ever since. 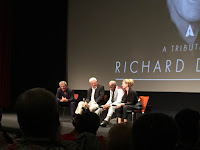 The highlight though was towards the end when Lethal Weapon stars Mel Gibson and Danny Glover took the podium and riffed effortlessly and hilariously off each other for nearly 10 minutes. Joking that Donner would tell Gibson to act better in dramatic scenes or that the actors would both get Oscars for Lethal Weapon 4 when it was really paying for the Donner's third vacation home. There needs to be a Lethal Weapon 5 or at least a sitcom for these guys, pronto! Co-star Rene Russo joined them and sang Donner's praises and then the man himself joined them on stage. Donner was funny but mostly flabbergasted at the turnout and kind praise. In the lobby were posters, slates, production displays and more on display. Truly a great night to one of my favorite directors. I was an intern there when I first moved to LA and got to chat with the down to earth Donner whenever he came in as he asked me about my workout habits as he was working with a trainer several times a week (before saying "yeah? fuck you"), my immigrant parents and calling me "kid" or "Rocky".

Posted by viendammage at 8:20 PM