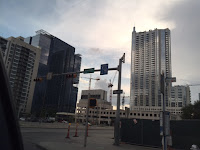 I've been to Austin, the live music capital of the world, the weirdest spot in Texas, on and on, four times. Twice for work and twice for Tough Guy Cinema events at the Alamo Drafthouse. The lady went to school at the University of Texas so we took a few days to see the ever changing city, an entire day of Kurt Russell movies and walk the campus. Summed up, Austin is a weird spot, you've got a mish mash of big city high rises, outdoor food joints made up of trailers and picnic tables, new construction, historic neighborhoods and the like. While Culver City in Los Angeles faces restaurant-pocalypse due to an abundance of establishments and only so many customers, Austin is literally full of bars. Most of them serve queso, booze is cheap (two Jamesons for $14?!) and there's beards, bums and bachelorette parties galore. 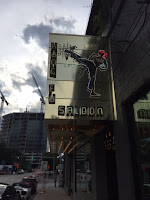 We walked over to Easy Tiger and the Dirty Sixth area, home of lots of youngins and a grungy, college feel. Over on West Sixth you've got the new Kung-Fu Saloon, a spot for arcade games (mainstream fare like Street Fighter and The Simpsons) and Steampunk Saloon among others along with those beer cruisers you pedal and drink on. Lastly it was over to Rainey Street, a formerly not great neighborhood now transformed into new apartments and houses turned bars. Kinda like the Venice of Austin. Uber and Lyft had left the city a year ago over background checks and percentages but the former had just began services again. I still use local apps like Wingz and Fasten though, they treat the drivers better apparently. 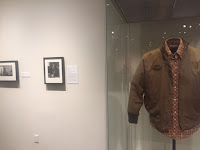 It's been a while since I've been on a college campus, haven't been to the one I graduated from since I left in 2004, but UT was pretty nice. Lots of nice architecture, a turtle pond and a Wendy's in the student union. Several restaurants across from campus were closed which is a shock considering the high amount of foot traffic. The Ransom Center has free exhibits open the public with materials for James Joyce's Ulysses, one of the only public copies of The Gutenberg Bible (one of the first mass produced books using movable metal type) and several pieces from Taxi Driver. Apparently there's a Robert De Niro collection housed there, who knew?
Posted by viendammage at 1:03 PM