After appearing on season one of USA's Colony, Dammaged Goods favorite Carl Weathers signed up for prolific producer Dick Wolf's Chicago Justice. The Law & Order creator kicked off another cottage industry of procedural dramas with Chicago Fire, Med, P.D. and most recently the legal focused Justice which follows the State's Attorney's office. Hot shot Assistant State's Attorney Peter Stone (Phillip Winchester) never loses in the courtroom and apparently is the son of a character from the original Law & Order. Carl plays the always well dressed, stoic and devil's advocate State's Attorney, Mark Jeffries. Now I've never seen an episode of any of the multiple Law & Order or Chicago series. But Winchester acquitted himself well in Cinemax's action series Strike Back along with NBC's short lived The Player with Wesley Snipes. Throw in the Weathers and it was an easy sell to tune in. Beyond the marquee names, I must say I quite enjoyed tuning into Chicago Justice weekly on the NBC app (we cut the cord a few months ago). There's always something deeper than the weekly murder or cover up and watching Stone and crew make the breakthrough that lets them triumph. Although there is a high rate of people getting pissed then admitting they did it. Sadly, the show performed decently if not spectacularly, garnering roughly 8-9 million viewers between broadcast and DVR in it's first 13 episodes and has not been picked up for season 2 by NBC. 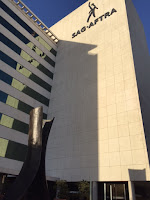 A few weeks ago, I received an invite to Catch Carl in person for a SAG-AFTRA Career Retrospective and we were happy to attend what turned out to be a near 2.5 hour discussion of his background and life philosophies. Weathers talked about his upbringing in New Orleans, getting into theater, college then professional football and pursuing acting after that. Encounters with the likes of Woody Strode, Burt Lancaster, Paul Newman and more inspired him to keep pushing and make his mark in an industry that does not always showcase black males in a positive light. Weathers kept it real, believing that if you wanted something and worked at it, things would happen. Maybe you wouldn't be a lead or a super star but you'd work. A story of not being able to perform a layup on the basketball court but practicing all weekend until he awkwardly could, was a takeaway for the rest of his life. Of all of his action related roles, Rocky I-IV, Predator, Action Jackson, etc., it was surprising to hear Weathers mention he was seriously injured performing a blind fall going backwards out of a window on Happy Gilmore. Years later he learned that he'd fractured two vertebrae and the bones had started to calcify.

This summer, Mr. Weathers returns to directing for a production of Danny and the Deep Blue Sea at the Edgemar Center of the Arts in Santa Monica. Set in a rundown bar in the Bronx, Tanna Frederick and Robert Standley play two emotionally damaged strangers who strike up a conversation that could lead to something more. Tony Award winning scribe John Patrick Shanley has written forty-one plays and won an Oscar for Moonstruck. The play starts July 1st and runs through September 10th with tickets on sale now.
Posted by viendammage at 12:23 PM