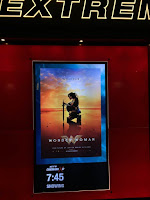 We checked out DC's latest flick, Wonder Woman, on opening Thursday a couple of weeks ago. Decades in the making, Gal Gadot's Wonder Woman was a highlight of the uneven Batman v Superman: Dawn of Justice and will have a key role in the upcoming ensemble Justice League. And compared to Man of Steel, BvS and Suicide Squad, Wonder Woman is the most effective, even tempered and exciting film yet for DC's burgeoning cinematic universe. We start off on an island of female Amazonians that is separate from the world we live in and meet young princess Diana. Her mother Hippolyta (Connie Nielsen) objects to Diana becoming a warrior but soon daughter defies mother and trains with her aunt, the greatest warrior on the island, Antiope (Robin Wright). In her teens, Diana discovers that she has the latent powers of a god, thanks to her absentee father Zeus. Soon, the sins of man invade their peaceful existence when pilot Steve Trevor (Chris Pine) crosses the dimensional threshold along with a pack of pursuing Germans from the Great War happening next door. Diana travels to the world of men to find and kill Ares, the god of war that Diana believes has infected mankind. A sweet yet dramatic fish out of water story ensues as Diana joins Steve as he heads to the front to face the evil Ludendorff and Dr. Maru.

Going in with no real expectations, the Patty Jenkins directed, Allan Heinberg, Zack Snyder and Jason Fuchs scripted Wonder Woman was an excellent time at the movies. A nice mix of fantasy, action and war film with some terrific production values, a great cast and well done action sequences with all the slow motion jump spinning you can shake a sword at. The film does remind you of other things though, with the beach locales and armored warriors at the start evoking a bit of Troy, then getting Captain America with the war setting and some men on a mission, Sgt. Rock vibes from the ragtag crew Steve rounds up to go on their mission. The film is doing gangbusters, having already grossed over $435 million worldwide in two weeks with one of the smallest week to week drops at the U.S. box office for the genre. The success is well deserved for such a wholly satisfying flick, bring on the sequel!