Last Tuesday night, director Peter Malota and producers Richard Salvatore and Rafael Primorac hosted the premiere of Jean-Claude Van Damme's latest film, Kill'em All. Held at the Harmony Gold Theater on Sunset, the same spot of the stacked Robocop charity screening years back. There was a crowd outside the theater and inside was a small red carpet set up. Frequent JCVD collaborator and friend Sheldon Lettich was on hand, one of the first things he said was that JC was not going to show after originally planning to attend. Classic Van Damme, the man remains a true enigma. Martial artist and usual Van Damme training partner at Gold's James Bennett seemed to be running the room while I caught up with several other folks I've met at other JC-centric events. Co-star Daniel Bernhardt, and star of the VD-less Bloodsport sequels, was on hand along with female lead Autumn Reeser. Josef Cannon from the still unreleased Full Love was in the lobby as well. 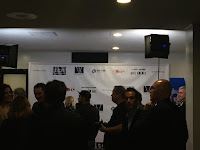 Peter Malota has been a long time Van Damme cohort, providing fight choreography for films like The Quest and The Order while appearing as a high kicking, spur wearing baddie in Double Impact. Here he's given his first shot at directing the Jesse Cilio, Brian Smolenskey and Craig Stewart written script. We meet Van Damme's security expert/bodyguard Philip being brought into the emergency room with a big slash on his arm and a possible concussion. Nurse Suzanne (Reeser) tends to him when a host of black clad bad guys show up, lead by Radovan (Daniel Bernhardt) and start shooting peeps. Slickly shot and produced with a surprising amount of beautiful establishing shots, Kill'em All is also all over the place. Every character walks in slow motion then gets a full on flashback introduction. Not simply a "one man takes on the bad guys" in a single location kinda deal, KEA has a surprising amount of geopolitical, Cold War, end of Communism and ensuing difficulties in Europe story filler, delivered by Peter Stormare along with Maria Conchita Alonso in what was probably a couple days of shooting in an office to get some names in the film. 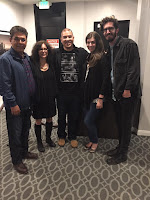 Son Kris shows up as a high kicking killer who likes knives while Daniel delivers some nice leg work as well. There's gunfights, grappling and fisticuffs galore with Van Damme throwing some hard round houses and hammer fists to the dome. Surprisingly, Reeser's Suzanne gets to kick quite a bit of ass and is far from a damsel in distress waiting for Van Damme to save her. Like Pound of Flesh, he's supposed to be in pain most of the time so his face is usually drained of color and sweaty so it's not exactly a vanity project. While it's not full on sad Van Damme, it's close. Philip's part doesn't have a juicy arc or dialog so it's not on par with say Wake of Death or Until Death from the 2000's. All in the film isn't as action driven as I imagined but it also wasn't as small in scope either. We'll see where Black Water, a reteaming with Dolph Lundgren, goes from here.