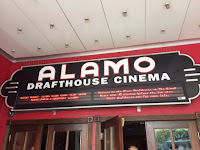 A couple of years ago I visited Austin for the first time to attend a special screening of Lionheart and Only the Strong with writer and director Sheldon Lettich. Local Alamo Drafthouse programmer and editor Greg is a huge action movie fan, putting on marathons for the likes of Jean-Claude Van Damme, Sylvester Stallone and Nicolas Cage (who attended the recent 4th edition). Russellmania was a celebration of the Saint of Being Charmed Kurt Russell and we attended the sequel a couple of weeks ago as a long weekend getaway. Luckily the lady is a huge Kurt Russell fan and spent some time in Austin growing up so everything just lined up. Five mystery films, a themed menu and a few surprises seemed like the perfect way to spend a Sunday. 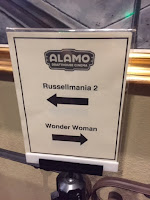 Starting at 11:30 AM, the Ritz on Sixth was already packed and there were plenty of Jack Burton tee shirts and tanks in the crowd. The 200 person theater sold out in a day and each patron was greeted with a special menu for the day along with buttons with Russell's visage from The Thing, Tombstone, Used Cars and so many more. Random and hilarious clips from Russell's vast filmography, from roles as a child actor in Disney flicks to providing voice over for DMV spoofs played along with trailers before each film. Greg welcomed the crowd and shared that Kurt Russell would not be attending but he was able to talk to the man and send him the line up. Russell and long time partner Goldie Hawn had both just finished whirlwind PR tours for Guardians of the Galaxy, Vol. 2 and Snatched, and it was time for a trip to unwind.

Big Trouble In Little China, I was a little disappointed this kicked things off as it played in the first Russellmania and of course we saw it at Beyond Fest with Russell in attendance last fall. But it doesn't take you long to fall back into the film as it's one of my favorite movies of all time and one of Russell's best roles/performances. Greg debated showing it again but when he proposed it to Russell, the response was "if you have Freebird, play Freebird", fair enough. 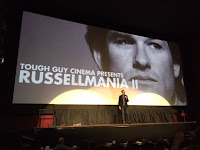 Overboard, this was a title I thought would play since Russell and Hawn had films this summer and received side by side stars on the Walk of Fame. It's still a fun flick with questionable morals but nothing you can't come back from. Plus you begin to notice Russell's beautiful hair and penchant for tank tops. It was a nice treat for the lady because she grew up watching the flick with her family.

Backdraft, this was one I didn't quite expect but should have since it was Russell's first big budget headlining film. Ron Howard does an excellent job crafting a solid drama with intense action sequences with real fire in the pre-CGI 90's. Sure it's a bit 90's cheese with William Baldwin and Iron Eagle's Jason Gedrick as part of the random montage that shows the danger of fire fighting along with the mundane day to day. Robert De Niro does his De Niro thing aka repeats himself to glorious effect. Awesome supporting cast here too with Scott Glenn, J.T. Walsh, Jennifer Jason Leigh, Rebecca DeMornay and Donald Sutherland. The lady was not a fan of William Baldwin though. Short hair this time out but tank top? Check. 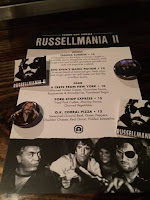 Tango & Cash, this was the wildcard title but I thought it should play because Stallone and Russell were both in Guardians 2. I could tell it was T&C from the opening Warner Brothers logo and gave out a big holler to express my excitement. Just the most random (delivery guy leaving with pizza? Russell's Gabriel Cash is really upset a bad guy shot his shirt that cost nine bucks), patriotic (don't let a limey jerk off cut your head off, let an American!), homoerotic (multiple men ask each other if marriage jokes are proposals, Cash dresses as a woman to escape police, he and Tango get to prison and immediately shower together) but fucking awesome 80's flick you could ask for. Between Backdraft and Tango, I realized that Russell is one of cinema's greatest screamers. He just goes into "scream mode" and you totally believe it and it makes you laugh. See Swing Shift "you want it pal, come get it!", Tombstone "Hell's coming with me you hear?!", Dark Blue "because they built it with bullets!", Death Proof "you really gotta be sitting in my seat!", etc. for more examples.

The Thing wound things down but I was pretty tired as I'd been fighting a cold for a couple of weeks and while John Carpenter's film classic, it's a movie I've seen on the big screen more than once. Greg and the staff made for a great day as there's full service food and booze you can order any time. We went for Jameson and Ginger Beers, a burger, a Tombstone themed pizza, popcorn and a cookie trio a la mode. There's still so many more films for a Russellmania 3 but sounds like Keanu Reeves might be the next star to get an Alamo marathon.
Posted by viendammage at 2:51 PM